I started on this Sailor Moon piece last year, but felt like I screwed it up when I started laying down my flats and abandoned it. It’s a common occurrence with me, tbh. I never really like my coloured pieces as much as I do the lineart. 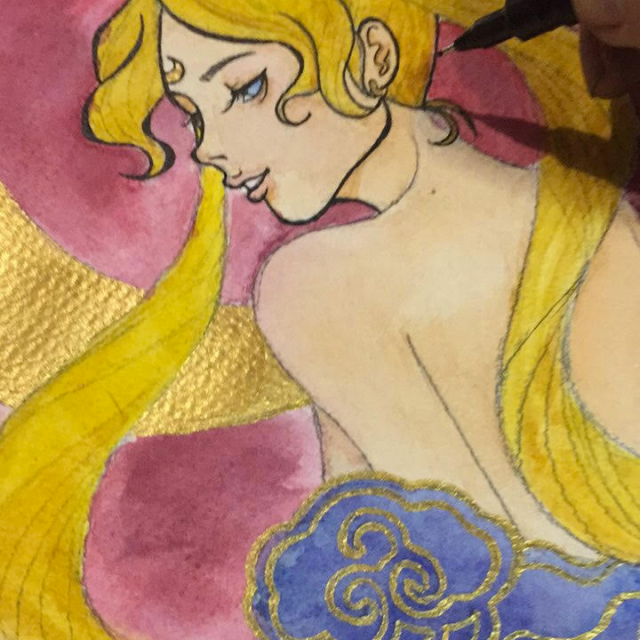 When I found myself a little antsy last night, I thought I’d try to save it. If anything, I could do with working on my colour palettes and such.

I might re-do this in the future. This was meant to be the first of a senshi series that I’m not sure I’m ever going to get around to. We’ll see if I can get my head out of ass and get to it. 😛

Bull In The Heather, the titular song by Sonic Youth, and so named after a real Kentucky derby horse, is poised for this exhibit as a metaphorical open source to the myriad readings on power dynamics, value, labor, craft, functionalism, mysticism, primal instincts, spectatorship, and performance, especially set on the strength and idiosyncratic vision of the artists involved, as to be an artist requires a considerable degree of conviction as headstrong as a prized race horse. The song, with the exhibit not entirely being about it and for it, serves as a prompt as well as to embody the fervor and attitude of an inter-generational discourse pop savvy on such issues. We are after all molded by the music we listen to, the films and TV programs we watch, the books we read, where we mine mostly the meaning of our existence, gleaning from the troubled and awkward age of our first awakening.

“Time to tell your love story “. For this exhibit it, is a love story as an op-ed confessional, broadly expressed as dainty wispy pen strokes of biomorphic expulsions , as sensuous lines streaming into rivulets of mane and waves of nymphs, as finely cut embroidered appliques of pre-pubescent girls, as dense as a rubber tires bound by netted lace, as vivid splashes of purple and tangerine on writhing bound bodies, or as brash as a glittered banner extolling anatomical proprietorship.
We thus embolden you to take on this exhibit as a Trojan gift horse to be looked on in its mouth, its ears, its teeth, its full form, inside and out, lest it gallops away with all your bets, for this art show will be gone, too soon.

I’m privileged to be a part of Bull in the Heather, an all-woman exhibit that opens on the 29th of August at the Art Center in SM Megamall. Join us for the opening at 6pm! 🙂 The show will run until September 10th.

Everyone's at the ocean this weekend while I'm stuck in the city so I'm making my own ocean lol. #WIP #art #artph #wood #acrylic

I finally finished my last piece for the upcoming exhibit and I feel so light. I’ve mostly been on self-imposed house arrest to finish on time. Now that I’m done, I can allow myself to be excited for the exhibit. I gave up surfing last weekend for this!

Details of piece no.5. I can now allow myself to be excited for the exhibit. 😜 #art #artph #wood #acrylic

I’m also excited to get back to the gym because I haven’t been at all this past month, plus I’ve been eating a lot McDs and instant ramen so I feel like a whale.

To aid in my Steven Universe withdrawal, I bought Attack the Light on the app store. (Also because the price went down from $2.99 to $0.99.)

While I’ve played a couple of RPGs in my day, this is my first turn-based one. It’s also my first non-casual game that isn’t on the DS, so I’m still getting used to the touch screen. Fat fingers and touch screens are never a good combination, particularly when the attacks rely heavily on timing.

The characters are voices by the same actors who voice them on the show which is awesome. It’s both really adorable and frustrating, because like Steven, I get stressed when the Gems poof ha-ha!

Just Singin’, Singin’ in the Rain:

I’ve got a trip coming up next month, so I’ve been on a pretty tight budget. I’d resigned myself to the fact that I wouldn’t be able afford to watch Singin’ in the Rain while it was in Manila. Lucky me, my fairy godmother of an Aunt asked me to be her date for the opening gala! ❤

It was awesome and just so much fun! I hadn’t seen the Gene Kelly movie since I was a kid, so the songs were a nostalgia bomb. Taryn-Lee Hudson, who plays Lena Lamont completely stole show.

It’s been a pretty good week, and I really hope this keeps up. After being sick on and off for almost a month, I could use more good weeks. 🙂

My labyrinthitis-induced vertigo finally subsided enough for me to get back to painting. Just in time too, exhibit ingress is just around the corner and I may or may not be in a constant state of panic.

I’m tired, and stressed, and all my insecurities are out to play, but I also never feel as good about myself as when I’m painting. The working noises in my brain hush the other noises that usually never shut up.

I thought I was finished with this piece, but something still feels off so I’ll probably be working on it some more tomorrow after work.  One more (mostly) done, and one last piece to go!

Last night had me rushing to submit requirements for the August group show I’m a part of and it hit me that I only have about a month and half left to finish three more paintings.

As usual, I will be painting til the eleventh hour.

Lining is my favourite part of doing pen&ink, but my least favourite when painting. #WIP

I really wish I could be one of those people who work at a steady pace instead of alternating weeks of sloth and days of manic frenzy. Part of it is, that I am a recovering lazy ass. Deep down inside I am lazy AF and constantly fighting it.

I always used to say that I was just waiting for inspiration, but a while back, Pallon gave me a proverbial slap on the wrist with this Picasso quote:

Inspiration exists, but it has to find you working.

While I’m trying to take that to heart this time around (I have a ruined wood panel to prove it!), I am (obviously) still finding it difficult.

Right now I am nursing a cold, and a cough, and a slight on-again-off-again fever, which only really adds to my sloth, but hear me, internets! Next week, I will be focused and I will finish these paintings by the second week of the August. 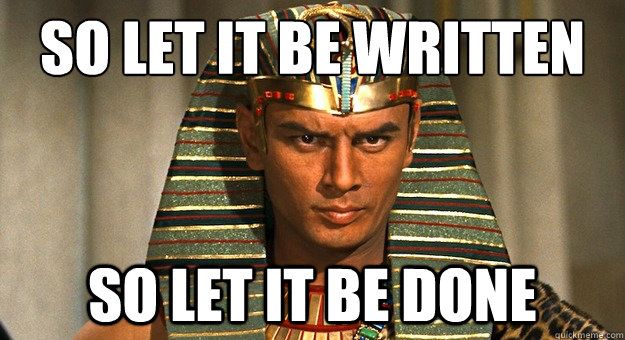 I usually wait til an exhibit has opened before posting photos of paintings, but right now I just don’t care. It’s been so long since I did a painting, I’m positively giddy.

The background irks me when I look at it too long because it’s not uniform, but Jooley calls it organic, so that’s what I’m gonna try to go with. Would anyone notice if I did the outlines of any future paintings with sharpies? I’d forgotten what a bitch it is to outline with a brush on wood.

Oh, and new watermark! I thought I’d make something that looked like my current logo just so it’s all cohesive and shit.

Now if you’ll excuse me, I’m off to bed to nurse this scratchy throat and headache.

Today, for the first time in ages (year? years?), I spent hours (5, to be exact) doing nothing but painting. It feels good to be creating something for myself again, although my joints and muscles seem to be punishing me for it.

Also because this piece is part of an upcoming group exhibit and the deadline is this week.

Turns out I just needed some Kylie Minogue on full blast to finally get this painting started. #wip

I’m part of Sinag‘ Dreams on Canvas fundraising exhibit. If you’re in the area on May 24, drop by! 😀 Details in the poster below. Click to embiggen: 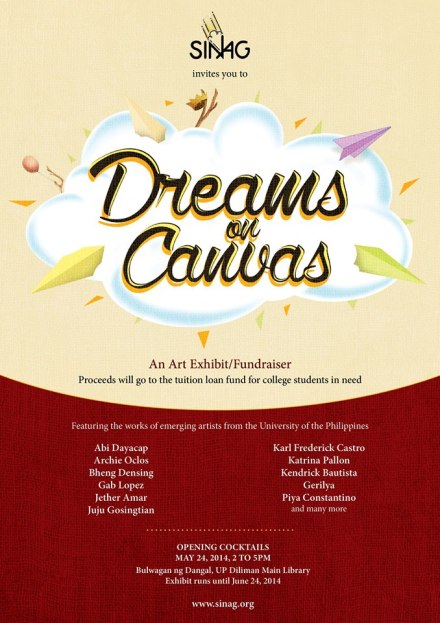 Horrible edit of a horribly-lit photo. Really need to take a proper photo of it. 😦

I was re-watching a lot of  L’Arc~en~Ciel concerts and music videos from the 90’s while working on this painting, so it seemed fitting to name it after one of my favourite L’Arc songs from that era.

Anyway, this painting will be part of Pet Project, a fundraiser for CARA (Compassion and Responsibilty for Animals) Welfare Philippines. The event will be held at Whitespace (Pasong Tamo Extension, Makati) on November 17, 2012.

More information about the paintings for sale and the event itself on the Pet Project website or the Facebook Event Page.

I was in such a state of panic during the last few hours before the ingress that I didn’t really have the time to think about the titles. I ended up naming them after the beings they based on; namely, Circe, Argus, Daphne and Arachne. Now that  I’ve been able to relax more, I’ve been able to give them proper titles. I’ve finally been able to flesh out my previous Circus and Greek mythology themes into one, cohesive series! Click on the thumbnails to full-view. 🙂 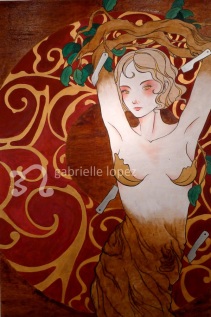 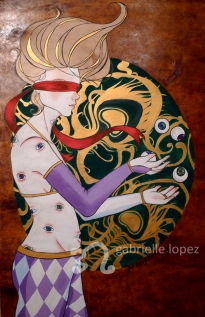 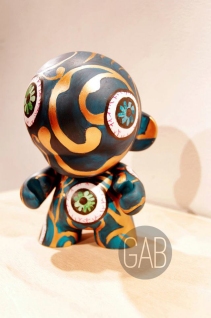 Greater Than That Of Athena, 2012, Acrylic & Varnish on Wood.

The Loveliest Of All Immortals, 2012, Acrylic & Varnish on Wood.

And as icing on the cake, our exhibit was featured in the Philippine Daily Inquirer  two weeks ago!

You can read the whole article (sans most of the photos) here!

I’m part of a 4-woman show this June, and my free time has been taken up with preparations. After a disastrous attempt at watercolour on paper, I started experimenting with acrylic on wood. 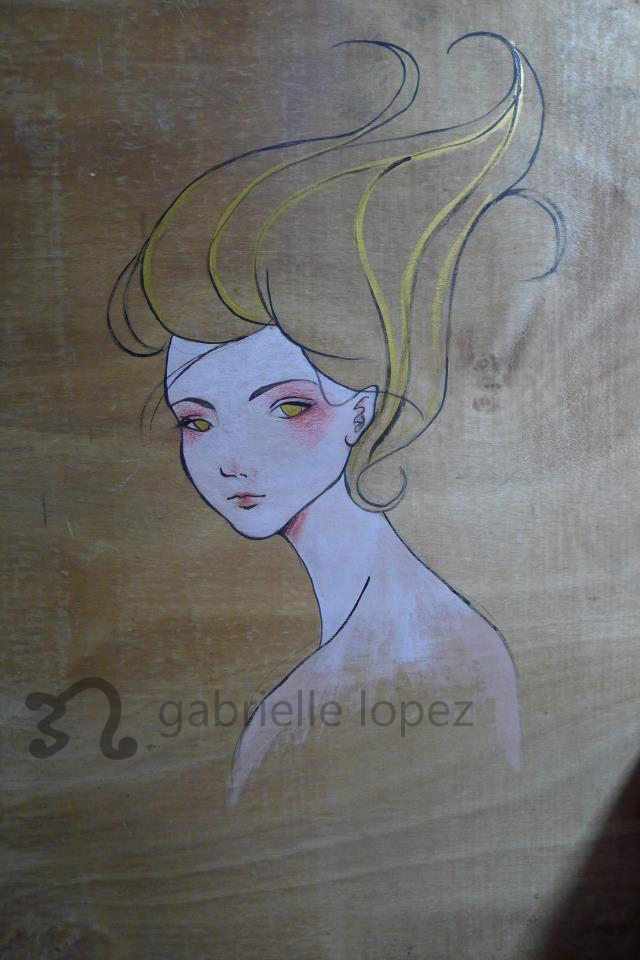 Here’s a really crappy camera phone work-in-progress photo of Circe, the ringmaster of my circus.

This is the largest I’ve ever gone. I usually work with A4-sized paper. Occasionally, A3, but this is me being overly ambitious hahaha! It’s 2.6′ x 4′! I still feel overwhelmed by the size of the wood panels, but I am pretty damn proud of myself. I thought I’d have it finished by Sunday, but it turns out I not only suck at backgrounds, I also suck at drawing pigs.

I will now go back to being on blogging hiatus. Still need to finish this piece plus five more by 2nd week of June.