This has actually been finished since Tuesday morning, but the lighting’s been terrible for photos because of the rainy weather.

I have been itching to experiment with painting on surfboards since I started surfing so I am beyond stoked that Nikko entrusted his board to me.

He wanted Medusa but with sea snakes, so y’all know I was obsessed from the get go. I’m glad we were on the same page of not wanting the design to take up the entire bottom of the board. I think surfboards look great as they are, so I prefer surfboard art that still lets details of the board come through.

I had originally thought I’d go all-out snake-mermaid, but it went in a different direction during the sketching process. I took a lot of inspiration from traditional Japanese and monster pin-up tattoos, which I think lent itself well to the limited colours I had to work with. 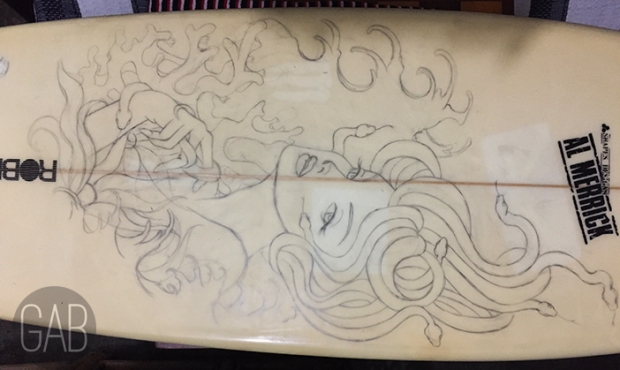 Which brings me to the struggle that was real: Paint markers. If we’re friends on social media, then you’ve witnessed my various meltdowns while I was experimenting and figuring out how to work with the markers. I’ve had to start over a few times, but I think it came out alright in the end. It’s the most fun I’ve had working on a piece in a long time. What I’m particularly patting myself on the back for is that I didn’t fall back on my usual crutches of repeating patterns and hair that takes up more than half the canvas. 😛