I actually only started reading the comics after the movie adaptation was announced. After the first few volumes, I was hooked, but a little skeptic how it was going to make the transition to film. When I found out  Edgar Wright would be directing it, I thought well, if it won’t turn out as a great adaptation it’ll at least be funny. 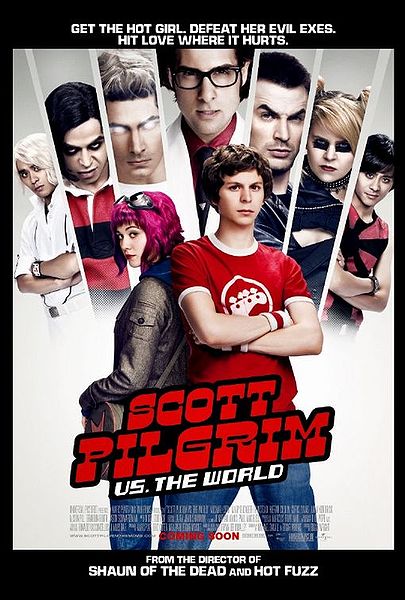 And it was all kinds of funny. Wright did a great job of bringing the comic to the screen. I thought he omitted, added and modified just the right scenes to make the story’s transition to screen work.

The real star of the show however is Kieran Culkin, who  was amazing as Wallace Wells.

I pretty much have no complaints. Except maybe for Michael Cera.

I’m not gonna lie though, the comic reads like Michael Cera but I’m getting a little tired of his one-note performances. He does succeed as Scott Pilgrim in one crucial aspect though: If Cera’s life had a face, you’d really want to punch it.

So far, the only not-so-enthusiastic reviews I’ve heard are from people who haven’t read the comic and maybe that’s where it fails as a movie. The comic itself is a little jarring when you first read it, but if you’re a fan of the comic, you should definitely check it out.

2 thoughts on “Scott Pilgrim Vs. The World”