There’s an interesting thread over at the Whitechapel forums about what popped your comics cherry. 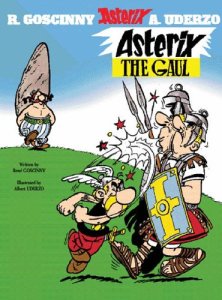 My parents, being huge fans, got the brother and I into them when we were kids.

Set in ancient Gaul, the series follows the adventures of Asterix and his best friend Obelix — residents of the only Gaulish village still resisting Roman occupation.  Getafix, their druid, brews a magic potion which temporarily gives them superhuman strength and speed, making them a perpetual thorn in Julius Caesar’s side.

“Asterix’ was awesomely funny and and it just keeps getting better with each re-read. As I get older, I discover easter eggs of jokes that I never would have gotten before.

We’re only missing 7 out of the 33 that were released. Aside from being expensive, the issues we’re missing are next to impossible to find in Manila. I’m trying to avoid buying online because Customs are going to hold it at the post office than charge me whatthefuckery import taxes, but I will hunt those missing issues down.

3 thoughts on “Asterix and Obelix”